We interviewed 2016 Platinum Prose award winner, Maeve Clarke, on what it’s like to win the Creative Future Literary Awards.

Q1: Can you tell us a little about your experience as a writer to date?

I have written on and off for a long time. I did an MA in Novel Writing many years ago. My thesis was in the form of a novel, ‘What Goes Round’, and I was lucky enough for it to be published by Tindal Street Press in 2003. I have also had a couple of readers published, one for students of English as a foreign language and another for teens with poor literacy. In 2012 I was selected for Critical Mass – a playwriting course at the Belgrade Theatre, Coventry and loved it. I’ve had a couple of short pieces performed script in hand, but nothing full-length. Towards the end of 2015, after a longer than planned break from writing, I decided to try and write as much as I could and to try different forms of writing too – which is how the flash fiction entry for CFLA came about.

2016 was a good writing year for me, I was selected for Commonword’s Women in the Spotlight 2016, for Birmingham Repertory Theatre’s Write Away programme. I won the CFLA Platinum prize for prose, and then ended the year with being one of the shortlisted writers for the Penguin Randon House Write Live initiative. I feel very fortunate indeed.

Q2: In 2016, your short story ‘Sewing Flowers’ won the platinum award for fiction. Can you remember what encouraged you to enter the competition?

My friend, Tina Freeth, who was an award winner in 2015 told me about the competition. I had never tried writing Flash Fiction, but had wanted to give it a try for several years. The competition gave me a theme, a word count and a deadline – I had no more excuses.

Q3: Has winning the platinum award has an impact on your writing?

Yes. When I wrote Sewing Flowers, I knew it was a strong piece and I felt that each of the three characters in the story had so much more to say. Winning the award has really boosted my confidence and I’m really looking forward to starting the mentoring process, writing more and seeing my work develop. This is a really, great, practical prize. Thank you!

Q4: What would you say to someone who is considering entering the competition, but is unsure whether they have enough experience as a writer?

DO IT! When I first started writing, I set myself the task of writing a short story from beginning to end over one weekend. I did – it had a beginning, middle and end – and that was enough for me. I entered it into a competition, not because I thought I would win, but because I had nothing to lose by doing so. Knowing that it would be read by somebody who didn’t know me made it easier than showing it to a friend.  I came third. Until now, that was the only competition I had ever won. So take the chance. It doesn’t mean that you will be successful with everything you write, but if you don’t try, if you don’t share it – how will you know?

I had never written a piece of flash fiction until the CFLA, and here I am.

Q5: What’s your one big tip for a new writer?

Write, write, write. Edit, edit, edit. Then write some more!  Just try and write as often as you can, even if it is only five minutes a day to start with. Once your story starts to develop, and it will, you’ll find yourself writing more and more. Eventually, you’ll get to the point where you wake up and your first thought is about writing some more of whatever you’re working on.

The Creative Future Literary Awards are open until 26 June 2017. Enter your writing here. 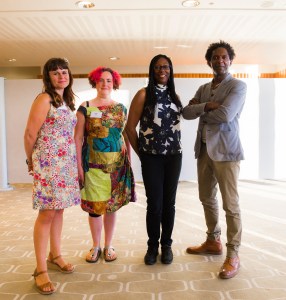