The Book Makers is a volunteer-run, community pop-up bookshop and learning space where commercially successful writers mentor emerging, underrepresented authors from diverse backgrounds. The Book Makers was granted a cost-only six-month tenancy by Brighton & Hove City Council to utilise their formerly vacant premises on Cranbourne Street. The scheme is a partnership between the council and Brilliant Brighton BID. 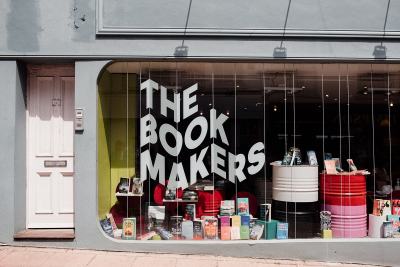 The Book Makers opened its doors on Wednesday 14 July 2021 and will remain open until after the Christmas period. Local Brighton bookshop Goldsboro Books is managing the shop’s retail content, with a percentage of revenue from all sales going to support the project. Goldsboro m.d. David Headley, who also runs the DHH Literary Agency, will be involved throughout The Book Maker’s lifetime.

"Bookshops have always been about more than just selling books. With The Book Makers, we’re building a space where established authors commit to welcoming new voices into the community of writers. It’s a place where people can learn about the craft — and - of writing."

In September 2021, The Book Makers begins a full programme of workshops in the space programmed by Creative Future, New Writing South, and Writers Mosaic. Engaging with the local community of writers, it will also run a programme of events, talks, and launches. Find out more about what's on below.

Workshops & Events for writers and anyone interested in writing