Home » News Stories » Ellie McKinlay-Khojinian reflects on her Creative Future Writing Workshops for members of the migrant, asylum-seeking, and refugee community in Norwich

Ellie McKinlay-Khojinian reflects on her Creative Future Writing Workshops for members of the migrant, asylum-seeking, and refugee community in Norwich

Last week saw the final workshop in a series of six that I had the absolute pleasure of delivering on behalf of Creative Future, for members of the migrant, asylum-seeking, and refugee community in Norwich, Norfolk. These were delivered in partnership with the National Centre for Writing, who was kind enough to let us use their amazing venue at Dragon Hall, a beautiful medieval building on King Street in Norwich. We enjoyed the relative freedoms of the in-between-two-lockdowns period to have four of the sessions face-to-face, with the remaining two moving online. 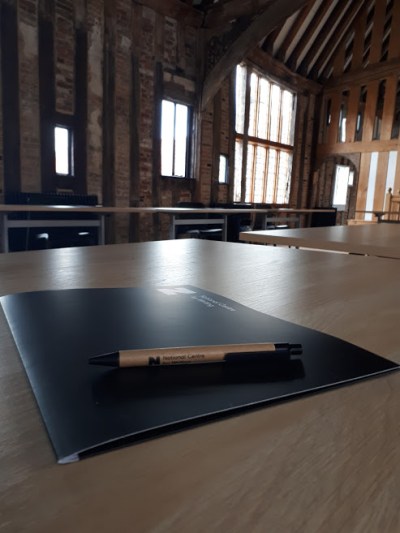 Participants were invited from several different community organisations in Norwich that work with members of the migrant and refugee communities – English+, Norwich International Youth Project, New Routes, and the People from Abroad team at Norfolk County Council. Nine adults signed themselves up – the brave lot – and came along to try their hand at reading and writing poems, translating some of their own work, creating a dialogue based on real-life snippets of conversation, and thinking about how to write a compelling character – all loosely based around the theme of Home. 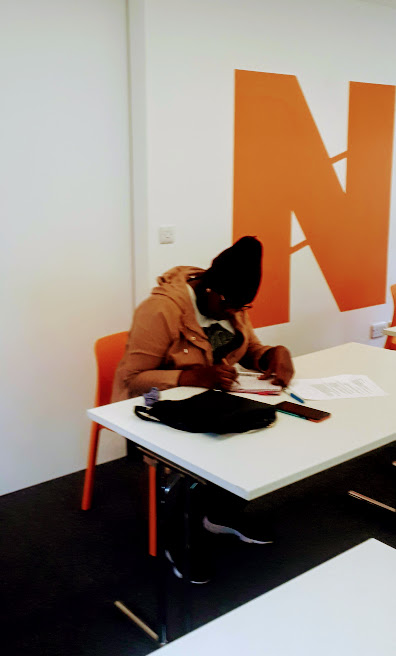 We had individuals from eight different countries – from Iran and Eritrea to China and Namibia and Turkey, Ghana, and Syria along the way – and more than double that number of languages between them! These participants had been in the UK for varying amounts of time – most were refugees – and had varying levels of English. The engagement and enthusiasm from the group were second to none, proving that language certainly doesn’t have to be a barrier to creative output. Some of the writing was beautiful – all of it was inspiring. Imagine the terror of sharing your creative work with an audience (we’ve all been there!), and then imagine doing that in a language that you are still getting to grips with… Well, all of the participants did just that. Totally brilliant. 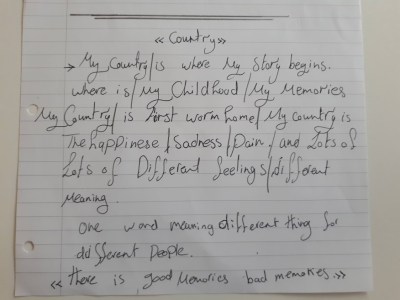 What was particularly lovely for me to take away from this experience was that participants that had signed up mainly hoping to improve their English language skills – and just have some human contact after long months of lockdown – went away feeling that they would like to take part in some more creative writing opportunities and so I am hoping to continue the work that we started here together and see about developing some more workshops in 2021. 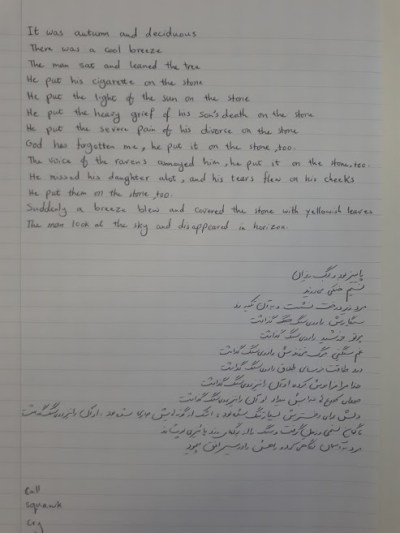 The experience has also led me to think more about how it might be possible to enable people from migrant communities to be more involved in telling, and in particular, translating, their own stories. I’ll be posting any updates on my social media account @EllieKhojinian on Twitter or feel free to contact me at [email protected] if you’d like to start a conversation. 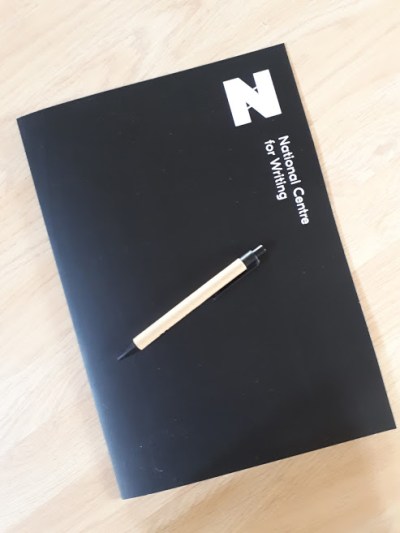