Home » News Stories » Announcing the winners of our 2021 Writers’ Award

Announcing the winners of our 2021 Writers’ Award

We are thrilled to announce the winners of our 2021 Writers’ Award competition. 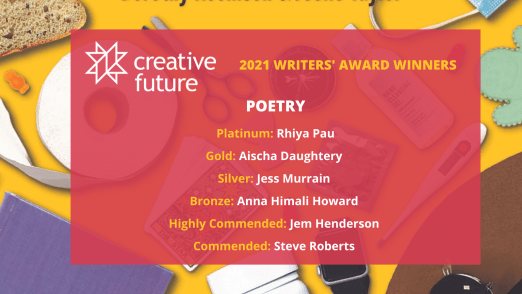 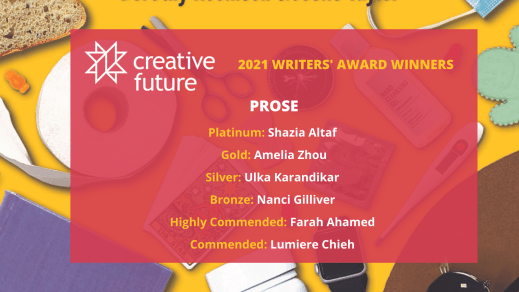 Congratulations to all twelve winners. We’re delighted to have found such brilliant new voices and are eager to continue working with them to develop their writing careers. We really enjoyed reading the entries and sincerely thank all who applied—the standard was incredibly high.

If you would like to enter the competition next year, the best way to see what gets through to prize level is to read one of our anthologies.

This year’s winners will be celebrated as part of the London Literature Festival on Wednesday 27 October, reading alongside our judges Dorothy Koomson and Joelle Taylor—tickets are going fast, buy yours here.

“Judging the Creative Future Writers’ Award this year was a real pleasure and incredibly difficult at the same time. Everyone on the longlist and shortlist could have won, and it was such an honour to be able to read these writers when they are at the start of their careers. I loved the winning pieces and every single one of them is a worthy winner. I am so pleased for them. ‘Essential Thread’ was clever and heart-rending as well as warm and well-written. The story belied the experience of its writer. I enjoyed it every time I read it.”
–Chief Judge Dorothy Koomson

“It was almost impossible to select our winners from such a broad range of exciting writing. In spite of that we chose winners who produced work that was surprising, inventive, thoughtful and epic. In short, work that was a joy to read.”
–Guest Judge Joelle Taylor

Aischa Daughtery is a Scottish poet and miscellanist who lives in Glasgow. After gaining her MA in English Literature and Sociology from the University of Glasgow (in 2021), she is now studying Publishing (Mlitt) at the University of Stirling. Her work has appeared in Adjacent Pineapple, Bad Betty Press, Not Very Quiet, The Queer Dot, From Glasgow to Saturn and more. Aischa curates @LesbianLoveNote, a visual archive and collective on Instagram, and has recently been awarded a grant to create and publish a book inspired by the account.

Jem Henderson is a non-binary queer poet living in Leeds. They have an MA in Creative Writing from York St. John University and have been published in Civic Leicester’s Black Lives Matter anthology, Streetcake, Full House and Dreich and are working on their first collection. Formerly homeless, Jem is now working as the Head of Innovation at Crisis.

Anna Himali Howard is a theatre director from Birmingham. Her work has been staged at theatres including the Bush Theatre, Soho Theatre and Birmingham REP. She is an Associate Artist at Brixton House. She likes crafts, food and growing plants, and her zines have been published by Skin Deep magazine. During lockdown she began curating poems on the noticeboard in her local park, which can be found at @sellyparkpoemoftheweek.

Jess Murrain is a theatre-maker, actor, filmmaker and co-founder of Theatre with Legs – an experimental, devising theatre company. Her poetry has appeared in bath magg, PERVERSE, Tentacular, Under the Radar, and Field Notes on Survival: A Bad Betty Anthology.  Her debut poetry pamphlet is forthcoming with Bad Betty Press.

Rhiya Pau is a British-born poet of Indian heritage from a community with a rich history of migration. She writes to chronicle the stories of her community and narrate the exploration of her own identity through the lenses of travel, food, ritual and language. Her work will be included in ‘Where We Find Ourselves’ (Arachne Press) and her debut collection will be published in 2022 to commemorate fifty years since her family migrated to the UK. Rhiya holds a BA from the University of Oxford and is a Poetry Reader at the Adroit Journal. Rhiya Pau is from London.

Steve Roberts was born and grew up in the Windward Island of Dominica. He recently completed an MA in Creative Writing and Education at Goldsmiths College. His short story Ole Man River is included in Altogether Elsewhere Anthology; Blue Door Press (2021). His poems featured in Story Makers Dialogues (Goldsmiths’ Edition, 2019) and A River of Stories vol 4 (2016), Alice Curry’s compilation of tales and poems from across the Commonwealth.

Shazia Altaf is an emerging writer from Middlesbrough, from a working-class background. She is currently working on her first novel ‘Jammed Ascent,’ which was long-listed for the Primadonna Novel Prize in 2021. She has worked in public libraries and as a teacher.

Farah Ahamed’s short stories and essays have been published in several journals and anthologies including Ploughshares, The Mechanics’ Institute Review and The Massachusetts Review. Her non-fiction anthology on menstruation experiences in South Asia is forthcoming with Pan Macmillan, India.

Lumière Chieh is a writer and songwriter of Nigerian heritage. She began writing poetry and music on a toy kitchen set as a child, making food, family and love the centre of her writing world. Her first song was about tomatoes, closely followed by heart-wrenching love songs inspired by Motown records cranked up to 11 on weekend mornings. She began to entertain writing more when it wasn’t just her Mum going to her gigs. Lumière balances writing earnest words with digital marketing and programme management. Lumière Chieh lives in London.

Nanci Gilliver was born in South-East London in 1993. She has a First in English and American Literatures from Keele University, where she wrote a second dissertation in Creative Writing. She has worked in office jobs and as a teaching assistant in primary schools across London. Her writing has been published in Popshot Magazine and she was shortlisted for the Alpine Fellowship Writing Award. She is working on a novel.

Ulka Karandikar spent her early childhood living across three different continents, moving between exotic locations such as Dar-es-Salaam, Mumbai, and Merthyr Tydfil. She currently lives and works in London, writing whenever she can. Ulka’s novel-in-progress has been shortlisted for the 2021 Owned Voices Novel Award and longlisted for the 2020 SI Leeds Literary Prize. She is also part of the 2021 British Council funded Write Beyond Borders scheme.

Amelia Zhou works with writing and movement, separately and in combination. Her poetry has been published in UK and Australian publications, most recently in LUMIN Journal, Cordite Poetry Review, Datableed, Gutter Magazine, and more. She has also written non-fiction for publications such as Sydney Morning Herald and Running Dog. ‘Bright’ is her first published short story. In 2020, she completed a MA Creative Practice (Transdisciplinary) at Trinity Laban Conservatoire researching translations between writing, voice and movement.