A surge in entries for this year’s Creative Future Writers’ Award has underscored how many writers see class as an obstacle to participation in the industry. Founded in 2013, the Creative Future Writers’ Award (CFWA) is a national writing development programme which celebrates talented, under-represented writers who lack opportunities due to mental health issues, disability, health or social circumstance.

Inspired by Lowborn author Kerry Hudson’s involvement as a Guest Reader at 2018’s CFWA award ceremony at the London Literature Festival, Creative Future made the decision to include class this year as a further category by which entrants could identify their underrepresentation.

While the number of entrants rose dramatically, from around 500 entrants in 2018 to 1,028 in 2019, over 40% of entrants – including seven of twelve of this year’s winners – identified that they came from “a working-class background”.

‘I think it’s wonderful to see that. Class is one of those hidden areas of marginalisation, and the truth is there are so many points of intersection between class and other kinds of marginalisation. So it’s a joy to see people recognising the potential to break down some of those barriers in an industry in which it’s not just class – but also income – that can plays a very big part in people’s ability to progress in it.’

Hudson, who also be presented the 2019 Awards at the South Bank on 25 October, says:

‘I think there’s a general awareness that’s been growing for some time that publishing has not perhaps been a particularly welcoming place to those who are in any way different. I’ve definitely seen a real increase in people owning their working-class-ness instead of trying to hid behind an accent and assimilate.’ Creative Future invites competing writers to identify how they see themselves as underrepresented, from a list that includes, mental health, physical disability, longterm illness, learning disability and homelessness, as well as being a carer, LBGTQ+, an offender or ex-offender and a survivor of abuse.  Interestingly, what the data from this year’s entrants also showed was that exclusion is not a simple process: 73% of entrants identified two or more forms of underrepresentation, 42% identified three, and 24% four or more, which may suggest that barriers to participation in the literary industry can be complex.

“Creative Future has been as nuanced as they possibly can be in that area, and that itself is a radical form of not just seeing this issue as just “You’re working class,” or “You’re from an ethnic minority”, but actually understanding that for some people there are several barriers and each present their own problem, which is maybe a next step towards diversifying the industry.” 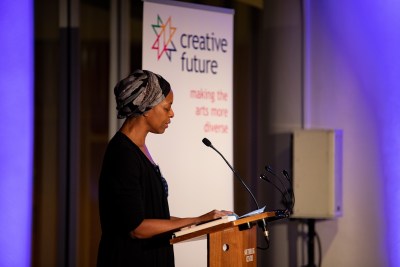 Susan Downer won the Platinum Prize for her deeply moving story Home, which took its title directly from this year’s competition theme. ‘I’d been extremely concerned about the government’s hostile environment policy. My parents are from that Windrush generation and that hurt personally,’ the Sheffield-based writer explains. ‘The story was my act of solidarity with all those people who find the rug pulled out from under their feet and who feel their lives start to unravel.’

Among the benefits she receives as a prize-winner are personal mentoring from The Literary Consultancy and other professionals as well as a place on one of the Faber Academy’s novel-writing courses.

Growing up in an Afro-Caribbean background, Downer remembers a careers officer laughing at her when she said she wanted to become a journalist. ‘I thought that was a very individual experience until I met other people who told exactly the same story. When you’re from a working-class background, especially when you’re from an ethnic minority background, you don’t know people who do things like this and your parents don’t know how to support you. The disadvantage is internal as well as external. It’s in the way you identify yourself. Creative Future are building those bridges to let people see themselves as part of those different worlds. That’s absolutely vital.’ ‘It wasn’t just the quantity of entrants that was amazing this year. So was their quality,’ says Jane McMorrow, Director of Creative Future. ‘It was a real struggle to pick just twelve. We see this as just the beginning of the journey. For any writer, it’s a struggle to find an agent. For our writers, the journey from – say – that 2,000-word manuscript that they have submitted to us, to a full manuscript can be incredibly challenging. Our focus now is to raise the resources and build industry partnerships to support our writers on that journey.’

After performing at last year’s ceremony, Hudson was looking forward to returning to the Southbank Centre for this year’s awards.

“It’s been a joy honestly. When I attended last year I was just in the final thick of finishing Lowborn, writing about marginalisation and the barriers that poor women face. But I came away so, so, so inspired, not just by the genuine intention there to make a change for those writers but also from the quality of work which was astounding. I couldn’t have wished for a better thing than being offered to judge this year. I think that Creative Future is making a change in the best possible way because it’s not about tokenism, not about just inclusion, it’s about the real breadth and quality of the work. The fact that these writers are marginalised is secondary to the fact that they are enormously talented.”